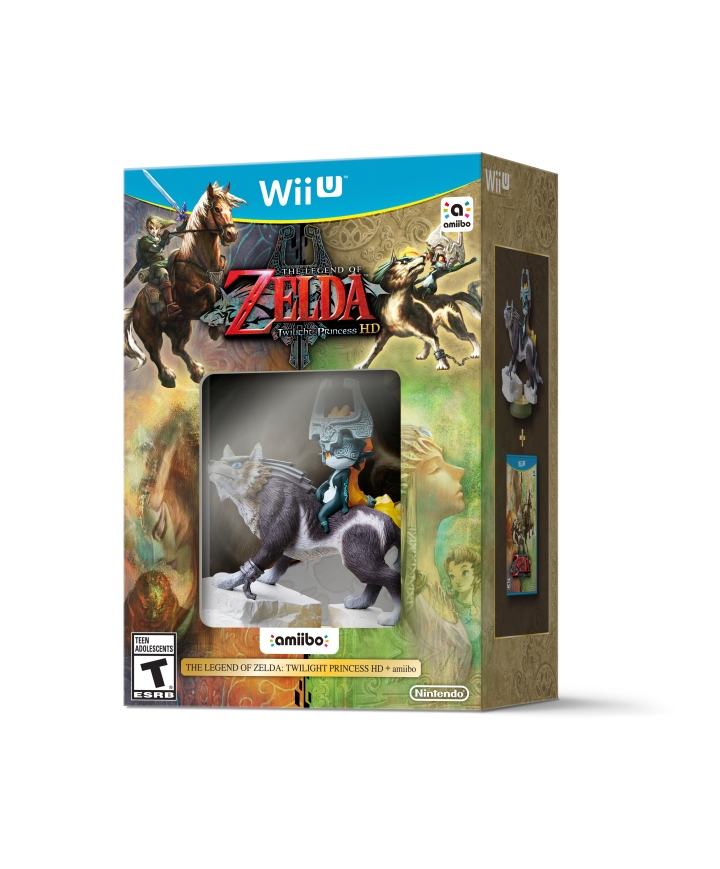 When the physical version of The Legend of Zelda: Twilight Princess HD launches on March 4 at a suggested retail price of $59.99, it will include a beautiful Wolf Link amiibo figure based on the same character from the classic game. Purchasing The Legend of Zelda: Twilight Princess HD and Wolf Link amiibo bundle will currently be the only way to get this amiibo figure. When tapped to the Wii U GamePad controller, this legendary lupine opens the Cave of Shadows, a challenging new bonus dungeon in the game. After completing the Cave of Shadows, players can save their remaining hearts to the Wolf Link amiibo, and then use those hearts inside the Cave of Shadows to replenish life energy. After conquering the cave, players can save a record of their remaining hearts to the Wolf Link amiibo and attempt to beat their score at any time. Some of the data stored on the Wolf Link amiibo figure can also be used with The Legend of Zelda game for Wii U, which launches this year. More details about this functionality will be revealed in the future.

In addition to the Wolf Link amiibo, other amiibo figures in the Super Smash Bros. series like Link, Toon Link, Zelda, Sheik and Ganondorf will work with The Legend of Zelda: Twilight Princess HD. By tapping the Link or Toon Link amiibo, players can replenish their arrows. Tapping Zelda or Sheik will refill the player’s hearts, while, in a devious twist, tapping the Ganondorf figure will actually make Link take double the damage!

Fans who are ready to compete in Rio de Janeiro with Mario, Sonic and the gang in Mario & Sonic at the Rio 2016 Olympic Games will also have to warm up their amiibo-tapping fingers. When the action-filled game launches for Nintendo 3DS on March 18 at a suggested retail price of $39.99, both Mario and Sonic amiibo figures will be compatible*. By tapping the Mario or Sonic amiibo figures to the New Nintendo 3DS system (or on a Nintendo 3DS, Nintendo 3DS XL or Nintendo 2DS system using the NFC Reader/Writer accessory), players can boost Mario and Sonic’s outfits with that character’s power for the day.

To celebrate the 20th anniversary of Pokémon, some of the Pokémon amiibo will be made available again at select retailers. Fans should be on the lookout for Charizard, Jigglypuff, Greninja and Lucario to once again return to shelves right next to Pikachu.

Finally, Star Fox Zero delivers a new beginning for the classic shooter series. With a unique control scheme that uses both the TV screen and the screen on the GamePad, players pilot multiple vehicles through intergalactic levels with Fox and his classic crew. The game launches exclusively for Wii U on April 22 and will feature amiibo compatibility. More details will be revealed at a later time.