A kidnapping on the streets of Shibuya brings together a hot-blooded detective, hard-hitting journalist, former gang leader, the head researcher of a big pharma manufacturer and a part-timer stuck in cat costume for a series of events each more unexpected and outrageous than the last.

In the scorched wasteland speed is all that matters! Apocalypse Rider is a VR arcade motorcycle game where you must prevail the high-speed wasteland roads, avoid the hostile traffic and keep surviving, speeding and RIDING!

Collect treasure as you master 33 games on six exotic Islands in your quest to be crowned Ruler of the Islands. Play solo or with friends via local co-op and competitive gameplay. Take on the world via an online leaderboard.

The Reef has fallen to lawlessness, and now the most-wanted criminals in the galaxy have organized a jailbreak at the Prison of Elders. You and Cayde-6 have been sent in to bring law and order back to the embattled facility, but things do not go to plan… 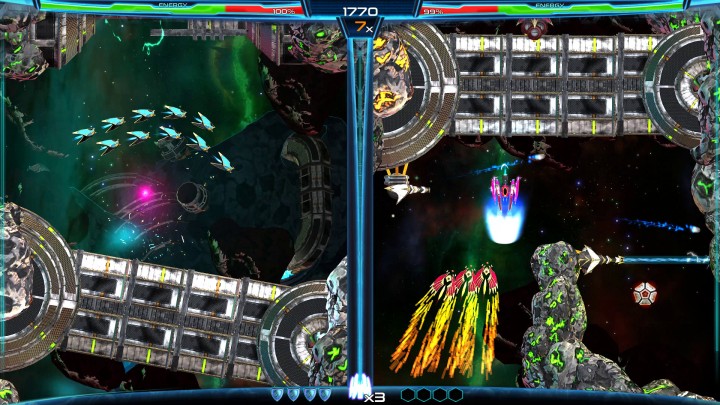 This intense space shoot ’em up challenges you to fight across two battlefields on one splitscreen. Instantly switch between them to dodge waves of bullets, reach secret areas, or surprise your enemies. Play solo or turn it up to 11 with a local co-op partner.

DRAGON QUEST XI: Echoes of an Elusive Age follows the perilous journey of a hunted Hero who must uncover the mystery of his fate with the aid of a charismatic cast of supporting characters.

Blast your way through waves of alien invaders in this retro style shooter with modern visuals. Collect power ups, destroy the enemy ships and defeat the mega bosses in 12 action packed levels. On your own or with a friend in local co-op mode.

Unleashed and unforgiving. Can you rise to the challenge? Immortal: Unchained is the latest addition to the genre of ultra-hardcore action RPGs. Take the role of a living weapon, unleashed to stop the source of a cataclysmic event threatening to end all worlds.

Moonfall Ultimate is a 2D side-scrolling, action-RPG, set in an industrial gothic universe. Hack, slash and cast your way through a treacherous hand-painted world in solo, couch co-op or endless arcade mode.

There are more ways to race than ever before in NASCAR Heat 3! Jump into the enhanced Career Mode, build your own race team and compete in the Xtreme Dirt Tour. Prove that you are the best in the world in the new Online Tournaments feature. Plus, all your favorite modes are back and better than ever.

Celebrating 20 years of redefining what sports gaming can be, from best in class graphics and gameplay to groundbreaking game modes and an immersive open-world “Neighborhood.” NBA 2K19 continues to push limits as it brings gaming one step closer to real-life basketball excitement and culture. The standard edition of NBA 2K19 arrives on September 11.

Show off your signature style on courts around the world as you earn the respect of NBA stars, legends, and icons who join your squad on your journey to be The One in The League and The Streets.

Ninjin: Clash of Carrots is an anime-inspired beat-em-up with varied enemies and deep customization. Play as the rabbit Ninjin, or Akai, the ninja fox, and fight to retrieve the carrots stolen by Shogun Moe! Redeem carrots for weapons, upgrades and more! Supports 2-player online or local co-op.

PLANET ALPHA, a beautiful alien world filled with mystery and danger. Pursued by relentless enemies, you must harness the power of night and day as you struggle to survive.

Shadows: Awakening is a unique, isometric single-player RPG with real-time tactical combat. You embark on an epic adventure with challenging gameplay, a gripping storyline and enchanting graphics.

Join Knight Sigi as he runs, jumps, and battles in a flatulent quest to save Melusina, the love of his life ! Take down hordes of goofy enemies and crazy bosses. Earn riches, find long lost holy artefacts and make your way up to the top of Mount Stinkup!

Play online or with friends as SNK’s iconic heroines in the brand-new 2 vs 2 fighting game, SNK HEROINES Tag Team Frenzy! Activate Special Moves with a single button, and make use of special items to change the tide of battle! However, the fight isn’t over the moment you’ve chipped enough health away. Once your opponent is on the ropes, utilize your Dream Finish technique to win the match! Spectate on other battles online, use your winnings to buy voice clips and accessories in an all-new costume system, and customize your favorite heroine to your heart’s content!